Three Peas in a Pod 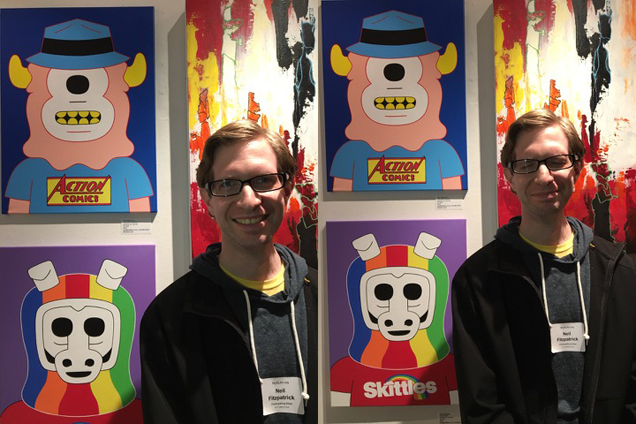 I wanted to touch on the 33March exhibit that came and went over the past few weeks.  It was another fun outing at the Old Orchard Gallery in Webster Groves.  A high point of the evening was my work being highlighted among the best in the show by juror and local artist Alex P. Johnmeyer.  Action Comics, Skittles, and I had a great time.  I’ll be back with more sooner than later. 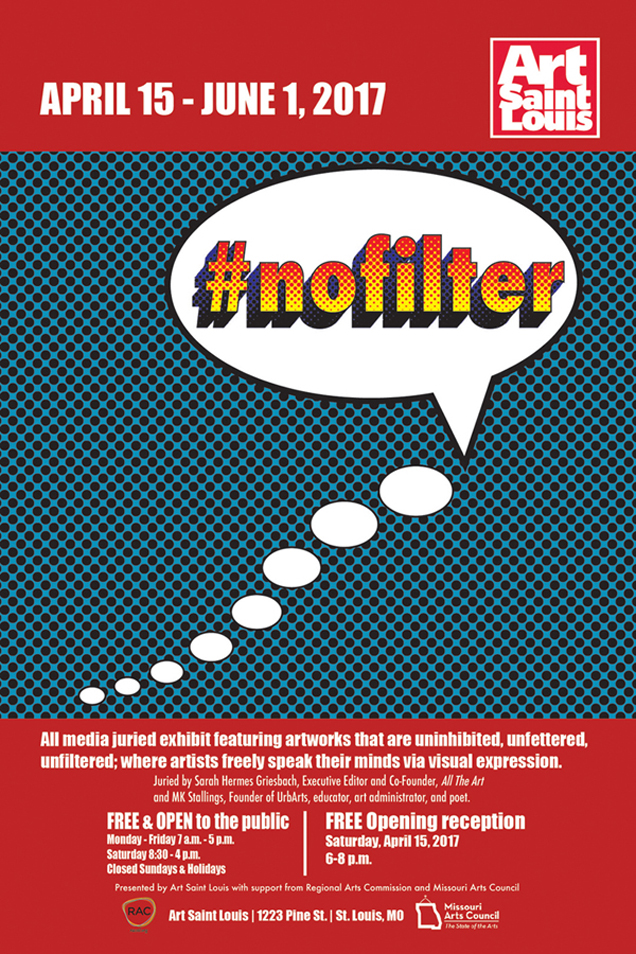 My painting, Fake News, will be featured in the upcoming #nofilter exhibition at Art Saint Louis.  The opening reception will be from 6 to 8 on Saturday, April 15, and the show will run all the way through June 1st. 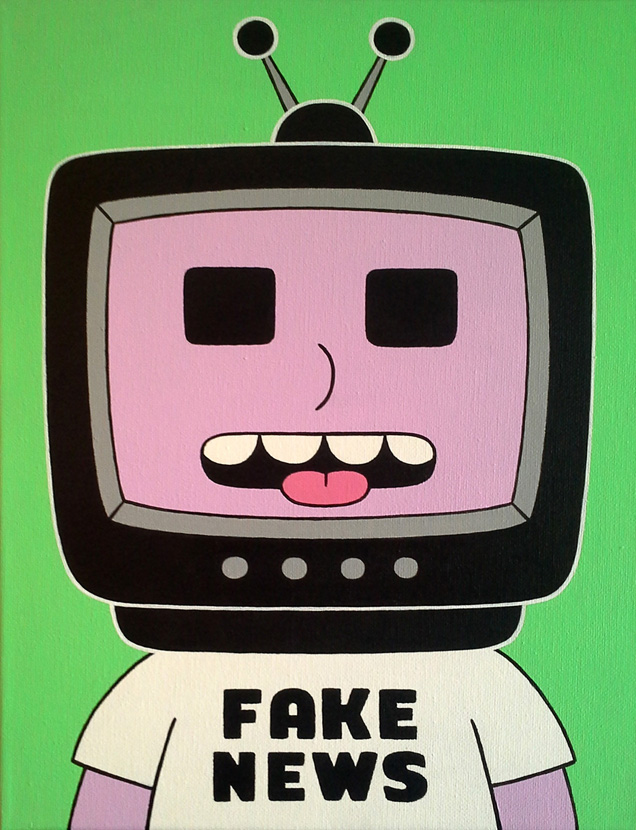 This was the first “topical” piece I’ve created since I started this series of paintings.  I’m pretty satisfied with how it turned out and have even been inspired to create more work along these lines.  I’m presently working on a piece titled Alternative Facts.

So if you’d like to hang out, high five, or rub elbows, come on down to the opening reception April 15th.  It’ll be a good time.

I’ll have two paintings featured in the upcoming 33March exhibition, presented by MySLArt.  The reception will be Friday, March 31 at the Old Orchard Gallery in Webster Groves from 6 to 9.  I’ll be busting out two of my favorites for this show. 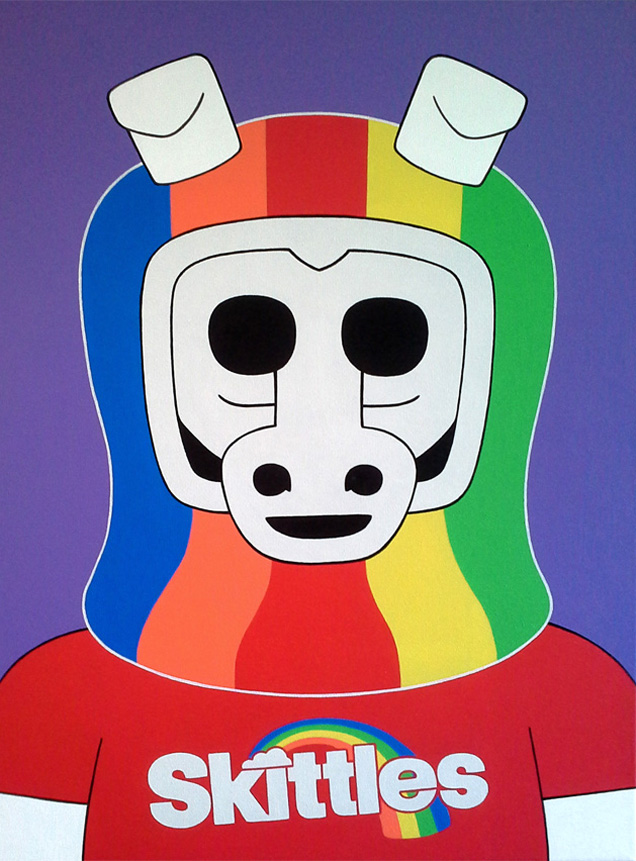 Skittles is something of a color dream (I just made up that term).  The finished piece is a mashup of two separate ideas I’d been churning around in my head.  One idea was a rainbow monster.  I thought it’d be neat to have a character with a sort of rainbow blob for a head.  The other idea I’d been mulling over was doing a riff on the logo for the Chicago Bulls (the big funky bull head).  Neither idea quite worked until I added the other to it.  I made the bull into something more of an equine, and then placed a giant rainbow “helmet” over his head. 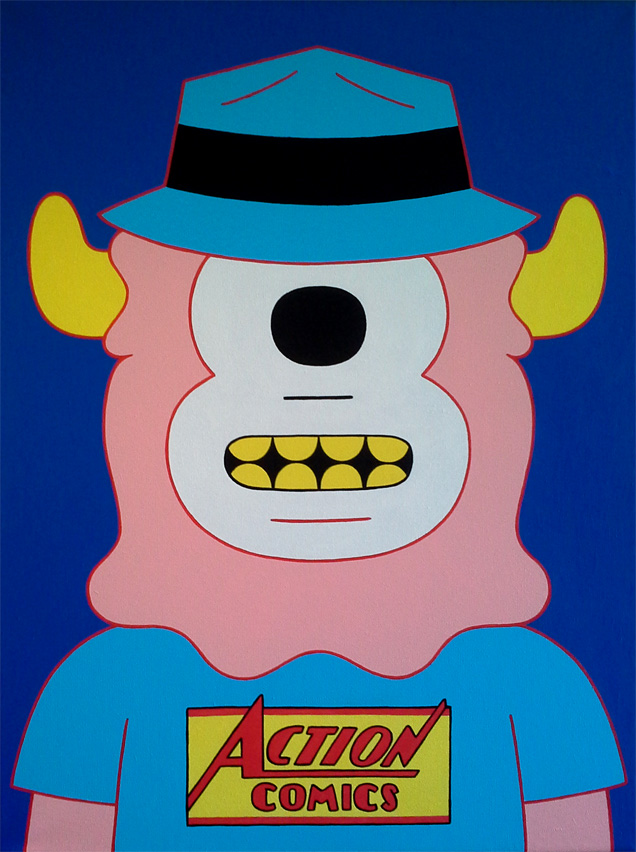 Action Comics was a way of paying tribute to some of my favorite comics I’ve been reading over the past couple years.  Though I’ve been reading comics all my life, I’d never really given Superman a real shot.  Curt Swan, the definitive Superman artist from the 50’s to the 80’s, has become a true favorite of mine.  The whimsy and weirdness of those stories really hit the spot.  I popped a Clark Kent hat onto the painting to seal the deal.

The show will be up through April 10th, but the real action will be at the opening reception on Friday, March 31st.  Be there or be square. 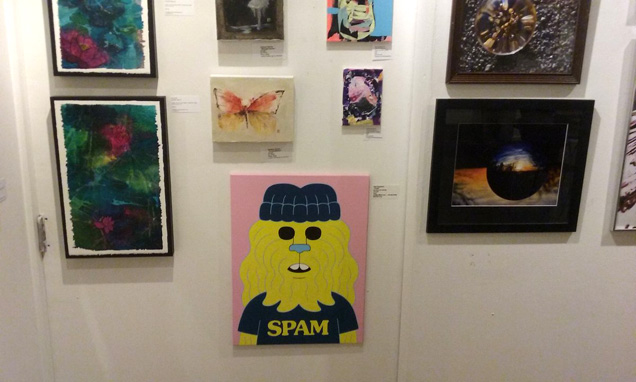 I had the pleasure of attending the opening reception for the 33February exhibition last week, and I’d like to tell you a little about it.  I was there at Old Orchard Gallery in Webster Groves to support my good friend Spam, who is among the many featured artworks lining the walls by a number of St. Louis artists.  I got to speak with a number of fun people and am looking forward to trying this show out again.  It really felt like a cozy community of artists. 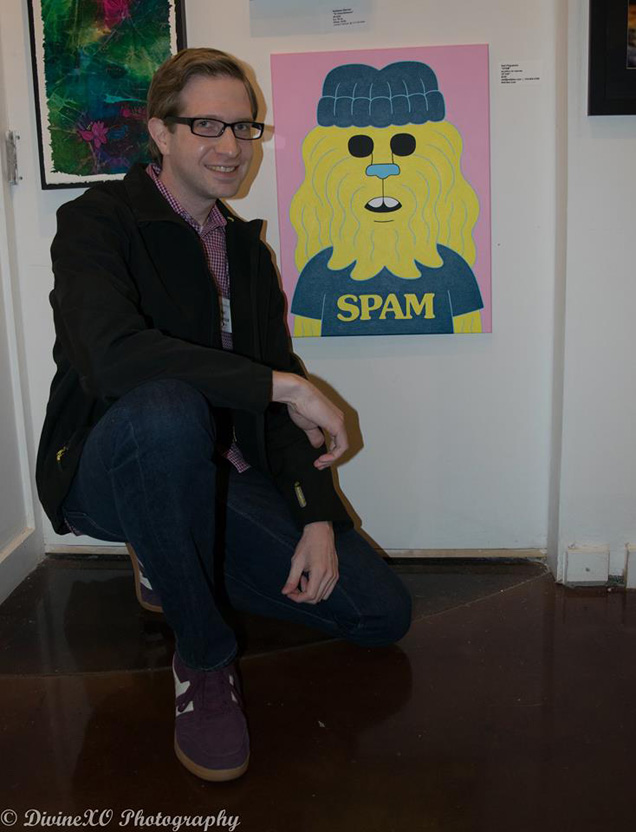 I had considered the “knee level” height that the painting was hanging at to be less than ideal. If not for the low level, however, I would not have been able to rock the crouching “cool man” pose.  I also think there were some tricks with the perspective in this photograph that are making the painting look crooked. Or maybe my aura blasted the painting off center in that moment.

If you find yourself jonesing for some Spam of your own, the show will be up through March 13th. 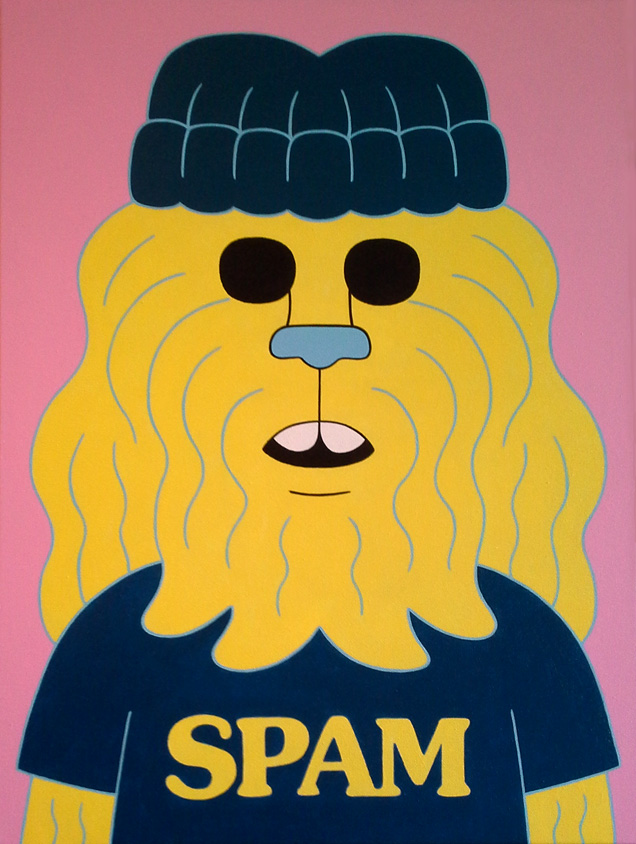 I’m happy to announce that my painting Spam will be among the many featured works at the MySLArt presents 33February exhibition, opening this Friday night, February 24th.  The gallery is in Webster Groves, MO, and the show will be up through March 13th.  I’ll be on hand at the reception and would be happy to say hello to anyone.

As for Spam, this was a piece I completed about a year ago.  I suppose I was aiming for something in the outdoors-man Chewbacca realm.  I had only just recently become acquainted with the actual Spam product.  It’s really not bad.  It goes good with eggs.